I was walking through the Pasar Malam aimlessly and somehow I  stopped at the Durian Stall. There were several displayed at the stall but none caught my eyes.
The Durian Uncle was trying his very best to make me buy the Styrofoam box packed with "Mao Shan Wang", although it was a super wet D13 screaming at me. Next he eagerly tries to sell me D13 as Ang Hei. God knows why.

I decided to walk away when I caught a glimpse of a pile of small durians. Immediately the thoughts of random choosing of durians, flashes across the mind. Hack.
I ask the Uncle: "How much for these?" pointing to the pile of Small Durians.
He happily replied " 4 for S$10". I was about to walk and he says again :"Okay Okay 5 for S$10 and no more, like that how to earn?"
I silently take a quick look to assess whether the durians are do-able. Then i retorted politely: " Uncle, these durians are from Yishun Forest, still need to charge money meh?".
The Uncle was shocked by that statement and quickly changed topic asking me to buy his other fruits in quick succession. I knew it, this fellow just now says all this are Segamat durians, but actually, I think it is some Durian Hunters who sold him the durians.
I quickly took 5 and started taking Photos of it. Then his Partner came and asked why am i taking Photos. I happily replied that it reminded me of my childhood when my father brought me along to buy durians. In my heart, I was thinking, they must be thinking I am from NEA checking on them.

I looked forward to my mini-Kampong Durian Degustation in anticipation, so much so that i did not eat much for dinner.


The Delectable Experience in opening up the durians was a Dejavu to me. The flavors that hit my taste buds were so full of character! It was one moment a Plain Jane, and next moment a Cassius Clay. Punching me with all the alcoholic contents. I was lucky to get the Xo, D24 and a bit of Tawa from the little 5s as I would call them. The other two i had is a tad bland. however that is what i love most of a Tikam Durian, you can never anticipate what's next!

﻿
﻿
The durians did not disappoint at all!
Parting Shot

Looking at the picture of tissues would have told you what an Orgasmic Experience I had earlier on, the only time when u can rave in the waves of sensations with each aril. My mouth and tongue has not been working so hard for a long long time.
Nevertheless, the efforts to finished up that 50plus Arils in 2 hours were well worth it.
﻿
﻿
Posted by Prickly Sensations at 12:56 7 comments:

Something Bright, Something Yellow, is that the M... (Part 1)


Yellow Yellow Dirty Fellow ... who is that dirty Fellow? 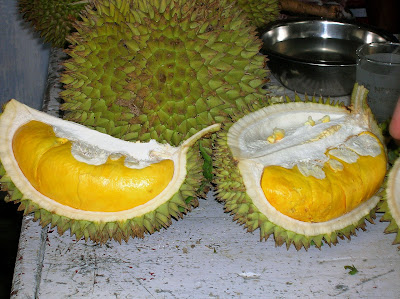 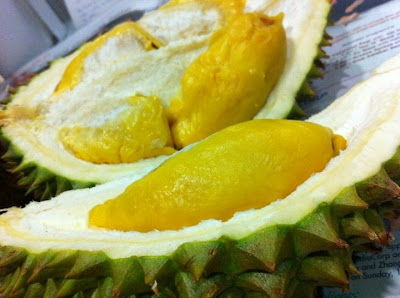 How many would think you know what the above is, if a durian seller were to show you this?
(Hint: This is what you get during the off-season)
Posted by Prickly Sensations at 12:18 No comments:


Following a tip-off from Ah Seng, my regular hunt, I headed down to Ghim Moh to have a look at this cultivar.  He mentioned that one will get two distinctive taste out of this durian.

Well, that is where i would like to find out.

I managed to squeeze something out of him regarding what so interesting about this fellow.
I wasn't thinking too much about it when i bought the durians and left.

After shower, i skipped gleefully towards the refrigerator and begin my conquest. There shall only be one Victor tonight, and that's me :)

As I sink my teeth in on the first bite, my eye brow was dancing up and down, adding a few more lines of wrinkles to my forehead. Hmmm....

The flesh is so soft, i would not have hesitated to nickname it the "Tau Huay Durian", it was that soft, i kid you not... or maybe a bit only. But the flesh really melts in my mouth, with a bitterness scoring index of 8 out 10.

I soon discover that Dr Jekyll and Mr Hyde characteristic when i pick up another aril to eat.

Eyebrow came up and hold, and the eyes started to squint a little as i bring it closer to examine.

This was totally different feeling from before.

Strange as it seems right?

It is like you are eating sweet Tau Huay suddenly you had a mouthful of savory ones. That type of u-turn you can get only in Loony tunes.

This time round, it tasted drier but sweet.

It seems that the wetter it is, the more bitter it becomes. The dry ones has a sweet taste to it. Strange indeed.

Of the various durians available from Malaysia, Tawa is the current season Top Performer. For those who are interested on this cultivar, I got it from Ah Seng Durian of Ghim Moh Market. Enjoy!


Posted by Prickly Sensations at 12:41 4 comments:

How Prickly am I

This is my first attempt at blogging.

As it is, I do not know how to go about in writing my first post.

How about starting with why I wanted to write a blog, despite me being terrified about writing and the use of poor language.

My first encounter with Durians precedes my arrival to this world. It is as real a claim as you would have see a durian falling on someone's head.

My dad n mum were stuffing up on this stuff that makes half the world goes Yucks!
It was said to be have good properties that is beneficial for pregnancy, well I ain't complaining :).

As far as I can recall, I took to Durian like a fish to water, when it was introduced to me at a relatively young age.

Every since then, things has never been the same.

Of all the things, I am supposed to remember as a young boy, I only remembers the smell of this wonderful fruit. Somehow, the word Durian really lingers in my mind, taste, smell or touch.

So much so that when it was in season, I could literally smell a durian a mile away! (actually it was only round the bend, but being a small kid, everything seems relative faraway).

The other thing that fascinates me just as much, only a fraction lesser, was the reading of the Pugilistic's comics like the Little Gangster and Dragon Tiger Gate.

I was always looking forward to the school holidays, this meant that I would have access to best of both world for me :).

Durians and comics came hand in hand the moment I landed in Masai, a small rustic town in JB, my mum's hometown. My mum's 2nd brother, my uncle, has a property up on the hills.

Back in the 70s then, it was sparsely populated, and lots of vegetations. What the eyes could see was rows and rows of Rubber Trees, it was so much fun venturing into it to play hide and seek.

Yes, hide we did and there was also something there we don't intend to find. We here refers to my bunch of cousins.

It was at back corner of my uncle's house that forged my destiny of this spiky fruit. You noticed I use spiky, not prickly, this is because I have not been pricked by it, yet!


During one of the December Holidays, i was flowering some plants at the backyard, personal contributions. That was a norm for Sugarcanes to be sweeter!

Well, I was doing my rounds and darkness came fast.

Happily as I was flowering, some thing whoosh into a bush nearby.

It was a heart stopping, or for the matter, water pipe stopping moment!

What's that sound? I look around precariously, while not trying to be too 'garang' to turn my head too fast, to scan for the source of sound.

Another whoosh! Woo hoo, off I ran!

A couple more sounds made me danced around like a man walking on hot coals, it was raining Durians!

Oh my goodness, green shells were falling from the nightsky!

Much as I carefully tries to steer clear of the artillery attacks, I clumsily kicked one on the way to the kitchen.

Yup, u guessed it! I was wearing the Japanese Flipflops. My toes showed their polka dots reds immediately.

That Prickly encounter was the first of the kind but not the last of it!

Though the pain was instantly felt, but it goes away just as fast, till i hit the showers.

I bet the night forest were filled with screams that made Scary Movies looks B Grade.

After the pain came the urge. The thoughts of falling shells was too tempting. I found a metal basin and a Guni sack from the store room, and decide to head for the battlefield.

With stealth like movement, I was able to retrieve the enemy's ammunitions.
It's time to dissect what had been belting at me. It was the first time I have seen and handled a wild durian. It wasn't as big or nicely shaped as those that my dad bought. But it was mine :) My precious.

As a kid, I had been quite mischievous. I had no idea how to open the durians. So i tried to do what i think a durian seller does. And while i was trying to whiff the durian like an expert. I clumsily pressed the spikes to the nose. Polka dots Red Nose!

Luck was shining brightly that night for me, i guess i must have thrown my tooth in the correct direction.

I found one of the Prickly that has a small opening!
And immediately i wiggle my little pinky to pry, poke or whatever means of extracting the flesh... Pinky, not what you think, you know who you are.

Riiiiinnnngggg, the alarm clock woke me up. 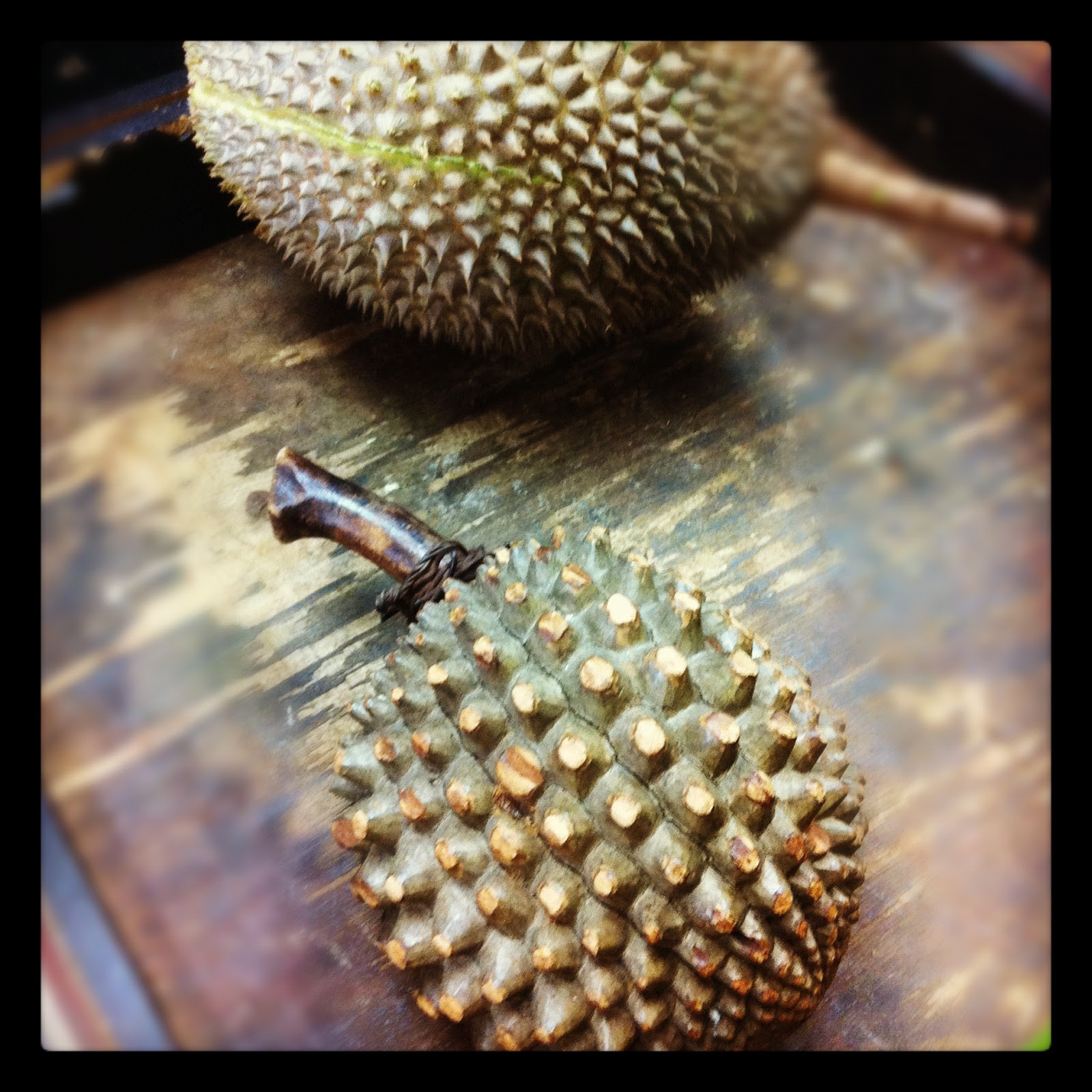 Later i was told by my cousin that I was konked out cold in the backyard with a metal basin besides me and a guni sack.

Haha... What an encounter... But definitely the sensation of wanting the fruit lingers in my mind so much that I must have braved the artillery head on!

Was it a dream or did i really overcome that barrage of shell artillery?

Whatever it was, i found two small Prickly keep aside for me... :)

Passion has driven me to writing this blog. And I wish for you to join me in this journey to explore and understand more about this wonderful fruit together.

Look out for my next post on "I have a Dream that all seeds are made Equal ..."

Posted by Prickly Sensations at 10:59 2 comments: